What tech startups can learn from Twitter buyout story 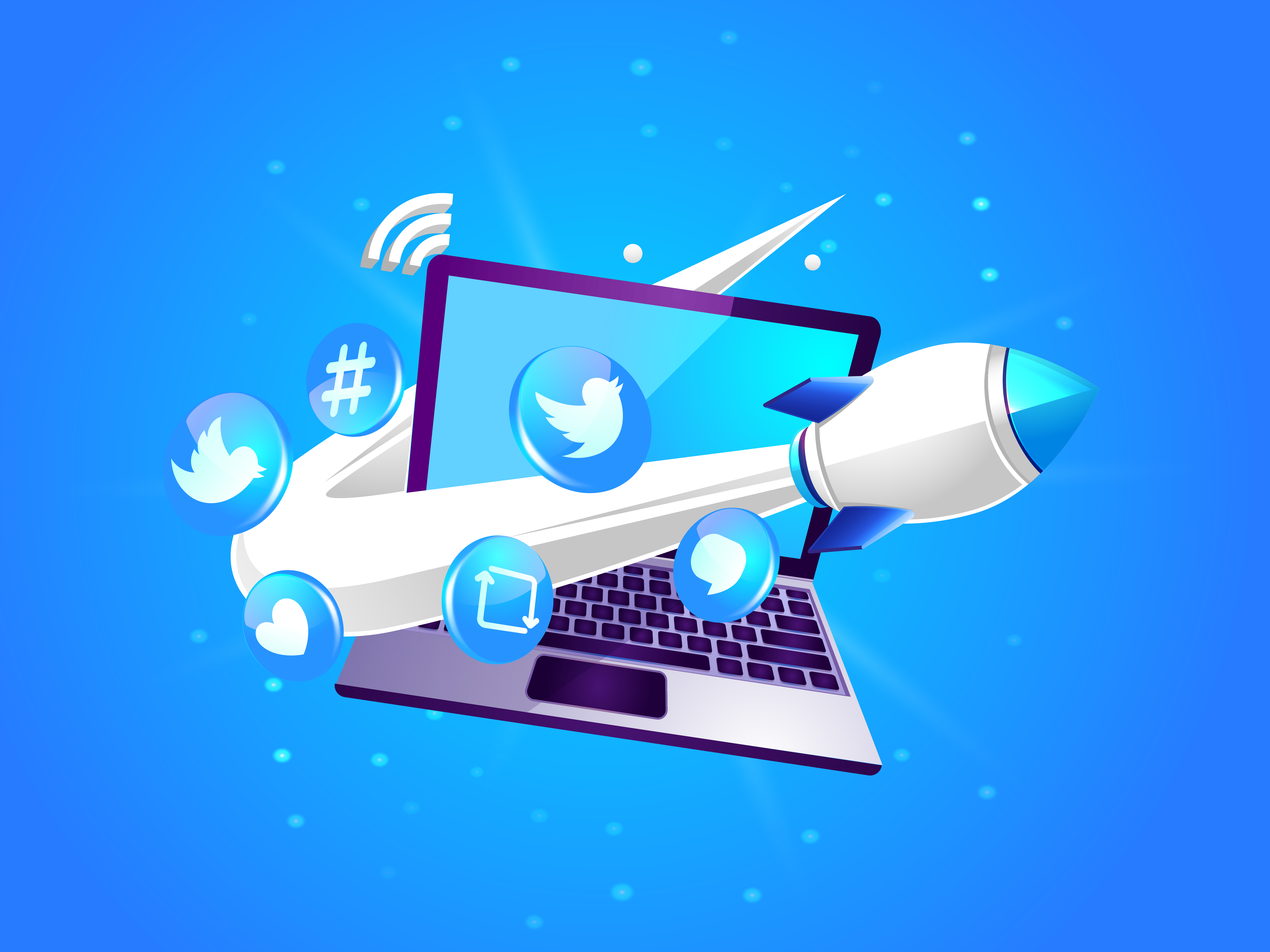 In this blog post we want to briefly review how Twitter was evolving as a social media and as a Tech company, trying to uncover what young tech companies can learn from it.

The Rise - a Microblogging pioneer.

Originally emerged from a podcasting venture in 2004, Twttr was a service that allowed users to send 140 characters long updates - exactly the size of a SMS text message - to their friends. That’s where the original 140 character tweet length came from, and Twitter for a very long time had a free SMS notification system. You could subscribe to as many users as you wanted to get the SMS of their every tweet update sent directly to your cell phone, and it was a huge factor to make sure that users don’t miss the most important updates. Nowadays it sounds odd, but It was an important feature back in 2005-2010th, when mobile data was expensive and internet-connected devices were not as common as today. It was especially important for the developing countries where the internet coverage growth was lagging compared to developed countries. This feature played a huge role in Twitter’s future social impact with many revolutions orchestrated worldwide via use of Twitter and other social media which allowed crowds to get messages in real-time and self-organize rapidly.

Even after adding image and video support, Twitter still remained a text centered social media. Text messages, especially the short ones, can be easily and rapidly distributed among an enormous number of users. This potential to spread messages virally, as a wildfire, made Twitter able to keep track of (and even set some) new trends that spread widely across communities. Twitter has found its niche among other social media. Unlike Instagram, who are focused on pictures, or YouTube with videos, or Facebook focused on connecting users with their real-life peers - Twitter allowed users to become influencers in their field of interest or expertise, to become a self-made media so to speak.

Twitter was so huge compared to other networks that it even played a key role in early adoption of Instagram. During the very first days when Instagram became available to the public, Instagram was mainly considered as yet another hosting for images that you could add to tweets - providing a short nice URL beginning with intagr.am. The reason was that Twitter didn’t allow you to attach images directly through their UI, but required users to put a direct link to the image hosting, and the URL length was considered a part of your 140 limit in the beginning. So, while Instagram didn’t initially have the user base that Twitter had, it made more sense to share pictures of food and cats on Twitter and use Instagram as a hosting for images. So, Twitter has powered the growth of a new generation of social media like Instagram, yet it failed to capitalize on the trend that it nurtured, as it failed to do so many times in future.

Twitter’s potential to catch the attention of the masses and allow them to self-organize rapidly was the root of both success and obstacle of the social media company. Being a political catalyst for many mass protest movements in many countries, Twitter played a huge role in some revolutions in Northern Africa, and even in fairly recent social unrest events in the US. The problem has almost become unbearable during the 2016 US presidential election campaign, in 2018 midterm elections and even the 2021 Capitol attack. Public criticism of recommendation algorithms, shadow ban policy targeted on people with specific political views and opinions has become a major concern for most of the mainstream social media, and Twitter wasn’t exempt. Every attempt to silence some part of the audience has led to discussion about freedom of speech and censorship, including the ban of the former president of the US Donald Trump from the platform in 2021.

Even though the platform isn’t a public place such as city hall or an open forum, and they can set whatever the rules they want as long as they comply with law, some people demand it to be more free. But there is also another big part of the audience that agrees with the need to ban what they consider as hate speech, provocations, lies and simply - spam. Ability to verify real people and their real opinions, and to distinguish them from bots that are used to promote agenda or spam of any sort, is still a major technical task that Elon Musk hopes to solve using his AI technology.

Amid all those ups and downs, Twitter’s share price and market cap was impacted to some extent. But because Twitter wasn’t the main and only “star” in these scandals and accompanied the likes of Facebook and Google, Twitter’s market price was highly correlated with NASDAQ market index.

Stagnation phase and the arrival of the Elon

In the mid 2010s it became obvious that Twitter couldn’t offer any breakthrough innovations, such as Snapchat or TikTok offered to the major public. Facebook and Youtube were successful in copying most of the innovative engagement techniques set to keep their audience from fleeing to new emerging social media. One of key examples of “stealing” the engaging mechanics were “stories” that were copied by almost every social media, including WhatsApp and LinkedIn, followed by the TikTok’s viral format copied by YouTube shorts and Instagram reels. But Twitter didn’t keep up, because they weren’t as flexible or because it was their intention to keep their core functionality unchanged. Either way, their activity dropped from a peak of nearly 660 million tweets per day to 300-500 millions, yet still Twitter remains the top source of regular news consumption among US adults - 55% in 2021.

Twitter as a company lacked the ability to grow as rapidly as newer companies, but it wasn’t suffering. It could afford staying as is - a commonly used media platform for some specific news topics, such as crypto and sports, with viral performances of famous influencers that occurred from time to time, including Elon Musk himself. Twitter just wasn’t one of the hottest companies anymore, though it still had its own charm, significant audience and sound business model - but without any visible potential for further expansion or innovation.

So, every time one of the most influential Twitter users, Elon Musk, used his Twitter account to engage his audience in extravagant discussions, from admitting that half of his tweets “were made on a porcelain throne” to crypto hypes such as DOGE, it had a very positive effect on Twitter’s traction. And this activity of Elon was topped by the recent acquisition of 10.3% of TWTR shares. It was then followed by a bid to buy out the whole company and seems to be a blessing to all the investors. It was also a good bargain for Musk himself, because he bought Twitter for almost half the price from its recent peak.

The fact that Twitter’s board has accepted Musk’s offer in just 2 weeks revealed that probably current TWTR shareholders didn’t see much of a potential or strategy to keep up the growth and meet expectations of the market. Elon, on the other hand, being the richest person in the world, says that he is not concerned about the profits. He can afford to be simply interested in revealing the full societal potential of Twitter and use it to promote the freedom of speech - for the sake of democracy and civilization. Long story short, Twitter buyout by Elon Musk is one of the most inspiring examples of a fruitful exit from the investment amid the uncertain future prospects of a Tech Company.

Elon Musk’s Twitter buyout shows that, regardless of controversy and company’s ups and downs, if the product itself has its inner value the company and stakeholders are destined to reach some kind of a success - even when there are no signs of better times ahead.

The fact that Twitter has always had an amazing team of developers with top notch work ethics has ensured the high quality of Twitter as an IT product, which attracted tech savvy users such as Elon Musk. So, if you as a tech company are focused on building a great IT product, and keep focusing on the user satisfaction, you'll find your way to success. At the end of the day, one of your future investors could be someone who just simply enjoys using your product today, so keep up the great work of continuous delivery of great products.