How long does it take to make a video?‍ 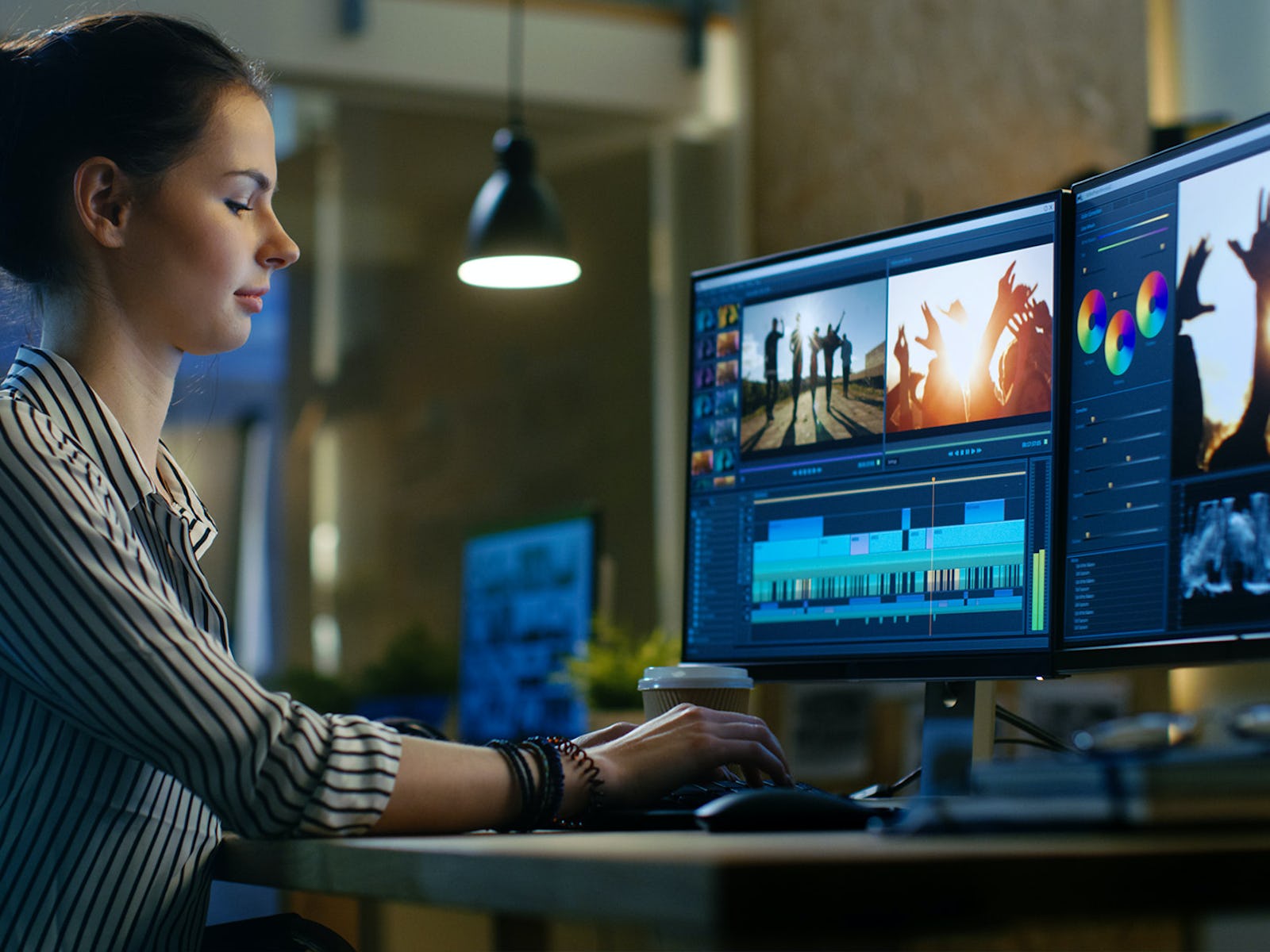 Videos are an essential part of any media communication these days. And depending on the purpose and place where videos are used, their formats may vary from 5 second funny videos to full-scale university courses. And the technical requirements for video production also vary depending on the type of the video. In this article we’ve tried to sum up our research on various use cases for videos and provide some reference numbers on how long it takes to produce a video for each use case.

Methodology used for this blog is more of a compilation of opinions rather than scientific research. The factors that we’ve taken into consideration are the learning curve and individual skill set differences. Learning curve is different for each video type production cycle, but it’s true that regardless of the field, on average beginners are 10-15 times slower than experienced users. Difference in individual skill sets defines both how quickly one learns how to produce a video, and also how much effort they put into production. For example, some movie directors are famous for their perfectionism, forcing their actors to do thousands of shots. Whereas other directors value “realism” of acting and welcome improvisation, with just a few shots taken to have more than one option for the editing stage. The same goes to modern video production for social media, product demos and YouTube, so if you're a beginner and want to use this article to estimate how much time do you need for a video - first try to ask yourself what type of video creator you are - a perfectionist or one who welcomes improvisation?

Stages of video production include everything from generating an idea, writing a script or a draft, in some cases - sketching scenes for shooting, setting up lighting and sound, shooting the video, editing, choosing music, titles, thumbnails, and finally - publishing.

Long story short, the most honest answer for ‘how long does it take to make this kind of video” is… “it depends”. But the numbers in this blog could be used as a healthy, realistic reference for time estimation, especially for beginners.

YouTube videos include various genres that are really different in both length, story and the complexity of actual shooting. Life vlog formats are easier to shoot but harder to edit, as you have to watch really long footage to find the most interesting parts and combine them into one story. On the other hand, shooting of scripted videos is directed by the script itself, but they require many shots and some acting talent, which may make the process of shooting longer (depending on one’s talent), but may save some time on the editing part as there is a story structure predefined by the script. On average, experienced YouTubers say that in the beginning that would take 3 hours of editing for a 3-5 minutes video. But after 5-10 videos, it takes 1,5-2x times of the footage length. Key factor for this much of an efficiency increase is that after repeating the process several times, each YouTuber finds their own format, creates templates and presets for editing, and starts writing scripts with understanding of their video production limitations. For example, they wouldn’t write any action scenes in the script once they know how hard it is to edit and deliver quality Video FX, so they write the script from the beginning, understanding what they can and cannot do.

So, a 1 hour long video could take 10 hours of editing for a beginner, and about 3 hours for a person who shot the video with full understanding of their format, cuts, and with some templates for editing that fit their format. Key word for YouTube and some other recurring types of videos is “Format”, as it defines a standard pathway for script writing, shooting, editing and what kind of video you want to see at the end of the process. But developing a format that fits you and your blog takes time, so don’t be shy to experiment with different formats during your first year as a video creator.

Video Podcast is a specific genre in video blogging, because the story should be told orally for the most part, but the video should add some extra engagement and value for the viewer, without being the core part of the story. It requires more thoughtful scripting, unlike life vlogs, for example. Because in Video Podcast you can’t say “hey look how beautiful it is outside today”, you should describe your thoughts and emotions verbally. On average, video podcast production for lifestyle genres takes up to 15x times for shooting. For example, if someone wants to show how they live normally, in some story like “a week of a 25-years old game developer in Tokyo”, 10 minutes of the end video might require 100-150 minutes of shooting, and about 30 minutes for editing. Whereas video podcasts with the recording from the studio require only 2x times for reviewing the material with almost no editing, just to check the quality of the sound and picture (like Joe Rogan Podcast), and maybe adding some transition to give a break to the speakers and to add commercials.

Podcasts in story-rich formats require many days of writing for the script. For example, the True Crime genre requires up to 3 weeks for finding a story and writing a script, and 5 hours of shooting for a 30 minutes video. Plus, around 15 hours for editing. So, as said in the previous paragraph, your format and genre really define how much time you will need per one episode, so pick something that you’ll love working with and creating.

Instagram has 3 main types of videos: regular video uploads (including IGTV), reels and video stories. Regular video uploads are no different from YouTube or live vlog videos, just shorter, but it’s preferred to keep it around just a few minutes long. So, the time to shoot and edit them is usually around 15-30 minutes, unless a person really wants to make this post standout as an important video and not a regular social media post. Keep in mind that on Social media people expect more of a personal approach by bloggers and they expect low editing, real emotions, and videos that are not staged. Try to keep your regular videos more honest and sincere, which is the way most users appreciate regular postings.

But for Instagram Reels video, the format is the same as for the TikTok, and you have to follow certain standards in order to reach a broader audience. In many cases, bloggers just use the TikTok app for shooting and editing and even upload a TikTok with its watermarks directly to Instagram as a Reel video. So, we can combine TikTok and Reels and describe it as one format. These videos are short, usually 30 seconds long, and usually include some viral song or audio track in the background. That audio usually dictates the format of that specific video, as they all have the original TikTok with that audio that made it viral. So, it’s better to follow the original intent and style of humor, with some personal touch to it. Time wise, it usually takes less than an hour to shoot and edit the TikTok or Reels video. The 2 main genres that may require longer are Dancing and Humor. The first takes extra time for choreography, which is not something that we can directly count as a time for production, but still it makes a TikTok production longer. And the latter requires time for scripting of the jokes to make it original and funny. This is also not directly the video production time, but requires time. Shooting itself takes less than an hour because the jokes videos are usually 15-30 seconds long. Despite the tight time limits, some TikTokers and Instagrammers take it seriously and creative, making over 30 different cuts and scenes in the video that is under 1 minutes long. The more scenes you have in a short video, the more time it takes, but considering that the end video is under one minute, it won’t take hours for editing.

The last type of Instagram videos - Video Stories - could be a pre-edited and uploaded video, especially for Travel Bloggers. But many people just record their stories directly from the Instagram App with no editing, but maybe with addition of filters, some simple emojis, GIF animations, location and time. It takes roughly 2x the time of the video length and can’t be really considered as a “video production”, but they are posted very often compared with “production level” videos, so we couldn’t skip them. Video Stories are essential for retention and engagement of your audios, Reels and TikTok help you reach broader audience thanks to video promotion algorithms, and regular video posts can be used as “store” for some thoughtful of important pieces of your content and you could refer people back to that “serious” video post in future.

Video Courses and Tutorials can be done in 2 popular formats - lecture style to explain some abstract concepts, and walkthroughs of some kind of a process, like a software tutorial. Lecture style, like Khan Academy style, usually requires a graphics drawing tablet to draw and explain the subject as if it was on a whiteboard. It is focused on the expertise of the lecturer and editing can be done by a TA or some kind of an editing assistant, and the length of the video and structure of it are centered around the structure of a lecture. The time for editing is at least 2x times of the original video, because of the requirement to make sure that nothing is missing in the video and all the explanations make sense. The editing itself is usually easy and requires simple cuts and text captions, maybe some visuals and a lot of attention to details.

Software walkthroughs are also usually shot in just a few tries given the person is the expert in the software that they showcase. If the content creator is a true expert who is confident in his skills with the software that he demonstrates, tutorials can even be held in a live stream format.

For pre-recorder tutorials, the whole goal of editing is focused on removing the “filler” parts to save the time of the end user watching the video course, without losing the important parts of the tutorial. The main factor in this kind of a video is not exactly editing, but the quality of sound and picture, because it’s really important to see every detail on the screen. And, of course, the expertise of the speaker. That’s why highlighting effects that help focus on specific parts of the software’s Interface are important for this kind of video editing. And because these courses can be up to 10-15 hours long, covering various topics and containing many chapters, editing is also very time consuming - up to 40-60 hours if there are many details that need to be highlighted and require attention.

To sum up, in this article we’ve learned that the general idea is that the length for shooting and editing is a function of the length of the final video that you want. The number of shots and time for editing also depends on the complexity of the project and skills of the creator, but overall it takes 2-3x times to produce the video for experienced creators working in genres listed in this blog. And beginners are 10-15 times slower than experienced people, so keep that in mind when planning your first videos. Here at Castofly Technologies we are building solutions for particular use cases and trying to automate processes and routines that can be automated, so stay tuned to see what we are working on.